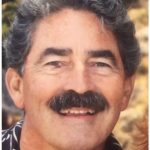 Raymond was born February 28, 1942 to Manuel and Ida Mercado in his beloved San Diego. He grew up in Golden Hill, surrounded by his loving aunts and cousins, who instilled in him a fierce love and loyalty to family.

He attended St. Jude's Academy and Our Lady of Angels, and graduated from San Diego High School in 1959.

He earned a Bachelor's Degree in history from San Diego State University in 1966, and a Juris Doctor from the University of San Diego School Of Law in 1975. Between earning his degrees, he served in the Old Guard, the Army's official ceremonial unit and escort to the president.