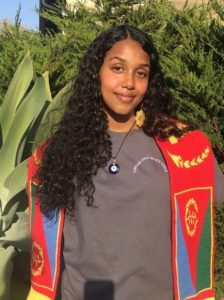 Delina Selam accepted an invitation by her coach to join a weekly #CoachesForRacialEquality Zoom meeting organized by Lincoln High School boys basketball coach Jeff Harper-Harris. The Lincoln coach, the 2017 recipient of the YMCA of San Diego County Dr. Martin Luther King Jr. Human Dignity Award, launched the webcast after the killing of George Floyd in May to address issues of race and social justice in high school sports throughout the county.

San Diego High coach Andrea Bird said to all in attendance, “The biggest thing I’ve heard from my student athletes is it’s not my turn to talk. It’s their turn to talk, and my turn to listen to what they have to say. They know a lot more than what we think.”

“I’ve noticed as a Black player the elitism a lot of White teams have towards predominately Black teams or teams with a lot of diversity,” Selam said. “I’ve noticed a lot, especially being a girl, it’s a lot more catty than how some boys are. There’s a lot of elitism. I don’t even want to name the school because it might seem to be shady or attacking them, but a White team calling a Black team ghetto is not right. Before Black Lives Matters or George Floyd no one saw that as a problem.”

Selam, 16, and her three siblings were raised in the Oak Park community of San Diego. Both parents are immigrants from Eritrea. They always taught their two daughters, Selam said, that women are as powerful as men even though they are not granted the same rights.

“I went to a predominately White school (Albert Einstein). ... I learned a very White history and heard about the Holocaust a lot of times. But people forget that Black people have long faced a genocide too. I always felt that I was an outsider and always felt that I had to read my own books every day. I would speak about Black people that no one ever heard about,” Selam said.

“I was just getting annoyed with the lack of information that my White peers had. I feel I have educated them enough, now it’s their time to do the reading and to learn, and I need to support my people because we are underrepresented. At my school, classmates are telling me I’ll get into college because I am Black even though I have above a 4.0 and are involved in numerous extracurriculars.”

She started a group — @DreamHighBlackGirls — “as a safe space for young Black women in San Diego. We provide unfiltered discussions, communal resources and bonding events for our fellow Black girls.”

The group’s goal is to uplift Black women and give back to the predominantly Black communities they live in. Fundraising supports food and clothing drives, feeding the homeless, sending feminine hygiene supplies to women in prison and more. In July, the group donated to the Alpha Project San Diego, which was providing emergency housing to homeless people in the San Diego Convention Center.

“After I started Dream High Black Girls, a month later my Latinx peers created their version ‘Mariposas Sōnadoras.’ This is huge because I inspired change across all communities,” Selam said.

Selam credits her older brother, Samson, and other family members with inspiring her. “He encouraged me along with telling me I could do way more than protests for my community and create real change.”

And when it’s time for tipoff, Selam knows it’s more than just a game.

“When we go on the road into those environments, and I know what’s coming, I use it as motivation to play an even better game. If I speak up about what the players may or may not be doing, it will sound like I’m victimizing myself instead of just playing the game or I’m bringing race in the sports world a lot of people feel don’t go hand-in-hand.”

After graduation from San Diego High School of International Studies, Selam said that she plans to head to a university to become a surgeon, focusing on limiting health disparities among Black women.