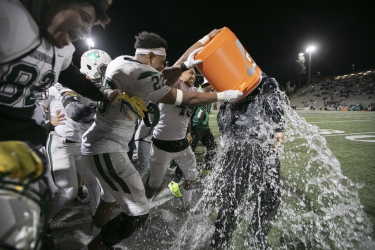 It’s not perfect. There will be some problems and conflicts.

There will, however, be a fall high school sports season, although it won’t be in the fall.

The State CIF Office announced Monday the start of the fall sports season is being pushed back by more than three months. Normally, football teams would be gearing up for a July 30 start of fall practice with other sports Aug. 1.

Last week schools in San Diego and many other California counties were barred from holding in-person classes until the coronavirus surge can be contained.

The State CIF is leaving exact starting dates up to the 10 sections, although it did mandate end dates, mostly in March and April for the “fall” season. That means the start of practice would be in December with games slated to begin in January.

San Diego Section Commissioner Joe Heinz said he will meet with advisory committees for all sports and hopes to have a master calendar for start dates by mid-August.

For this school year only, the State CIF has reduced its traditional three seasons of play — fall, winter, spring — to just fall and spring (even though the fall sports are actually in the winter).

That means some sports will switch seasons. And some spring sports will be pushed well beyond graduations.

“But we’re going to play all our sports and will have the same number of maximum contests,” Heinz said. “Seasons may be compressed, but we plan to play once we get the green light.

“Everyone wants to get back to some kind of normalcy. No one wanted to kick the can down the road and wait another month for decisions to be made.

“Hopefully, barring any setbacks, we get clearance to start practices on Dec. 14 with the first fall contests on Jan. 8.”

A reconfiguration of seasons means 10 sports in the fall with boys volleyball, girls water polo and gymnastics moving from spring.

The spring season would consist of 20 sports with a number of boys and girls sports playing at the same time.

“We’re in a unique situation in San Diego because field hockey and lacrosse are bigger than most sections,” Heinz said. “Plus, roller hockey and badminton are sports unique to our section.”

Starting late, the switching of seasons, brings up a number of potential issues:

Scheduling could be a major problem. Will schools be allowed to keep scheduled games against out-of-county and out-of-state teams? Football season will be 10 games in 10 weeks, no bye week. Playoffs will be cut down.

What about championship sites? Will Southwestern College be available for the football finals and for Bonita Vista, which calls the college stadium home?

Officials for all sports will be strained, especially in the spring. Football officials had already given notice that the association was short on personnel and might have to move games to Thursday and/or Saturday to cover all contests. Some officials work multiple sports.

Transportation and facilities will be stretched, especially in the spring. How do you play boys and girls soccer, boys and girls lacrosse and run a track program with just one stadium field available?

Some top-flight athletes — especially in football — will have to make a decision: graduate in December and get to their college program or stay and try to win a championship?

Will colleges have the same number of scholarships, to offer high school players?

Athletic training staffs will be stressed to the max, especially in the spring.

It may not be an issue at the larger schools, but schools where athletes play two or three sports may have a problem.

“Scheduling, facilities, officials and sharing of athletes all comes into play,” said Heinz, adding he will meet with the Health and Safety Committee, which will be “very important.”

“If we get the OK, sports may be able to hold some summer-type conditioning.”

La Costa Canyon football coach Sean Sovacool runs one of the best 7-on-7 summer passing tournaments in Southern California, honoring the Marine Corps. This summer’s tournament wasn’t played, but Sovacool would love to bring it back in the fall.

“Maybe we could do something in November, a Thanksgiving weekend deal,” Sovacool said. “State officials, school boards and school principals will help determine what we do.

“We’ve been thrown a lifeline, but we shouldn’t celebrate just yet. We’ve been given hope. I miss my guys. I miss coaching. You don’t know how much you love doing something until it’s taken away.

“Right now, I feel like the guy who keeps asking the cute girl out. It gets discouraging, but she finally says yes.”

To fit in all the sports, the State CIF has suspended for a year Rule 600, which states high school athletes are prohibited from playing for the club teams in their season of sport.

“We don’t want to lose any athletes because they have to choose to play a high school sport or play for a club team,“ Heinz said. “The San Diego Section has always been tougher on Rule 600, and we could be stricter. That’s to be determined.“

St. Augustine football coach Joe Kremer was optimistic a season could be salvaged, and was in favor of pushing things back.

Oceanside football coach Dave Rodriguez is anxious to get started, saying “we have a beautiful group.”

“I’m an eternal optimist,” Rodriguez said. “There are so many moving parts here ... economic and social as well as just playing.”

Sovacool may have said it best.

“There is now a light at the end of the tunnel,” he said. “But we as coaches and our administrators are carrying the light.

Field hockey (To be determined by sections)

Gymnastics (To be determined by sections)

B&G Lacrosse (To be determined by Section)

Competitive cheer (To be determined by Section)